We can define shear strain exactly the way we do longitudinal strain: the ratio of deformation to original dimensions. In the case of shear strain, though, it's the amount of deformation perpendicular to a given line rather than parallel to it. The ratio turns out to be tan A, where A is the angle the sheared line makes with its original orientation. Note that if A equals 90 degrees, the shear strain is infinte. 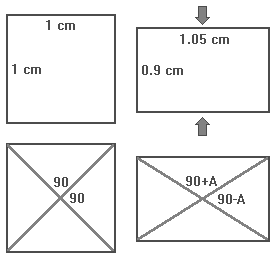 COMPARISON OF SIMPLE AND PURE SHEAR:

Simple Shear:
One direction remains constant and everything else rotates relative to it. Approximates the situation in a shear zone.

Pure Shear
Directions of greatest compression and extension are constant. The major and minor axes of the deforming ellipse remain constant. All other lines rotate.