Strain Energy of the member is defined as the internal work done in defoming the body by the action of externally applied forces. This energy in elastic bodies is known as elastic strain energy.

Let as consider an infinitesimal element of dimensions as shown in Fig .1. Let the element be subjected to normal stress sx.

The forces acting on the face of this element is sx. dy. dz

Îx = strain in the material in x – direction

Assuming the element material to be as linearly elastic the stress is directly proportional to strain as shown in Fig . 2. 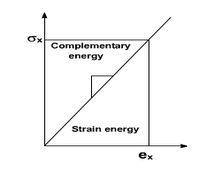 \ From Fig .2 the force that acts on the element increases linearly from zero until it attains its full value.

Hence average force on the element is equal to ½ sx . dy. dz.

\ Therefore the workdone by the above force

For a perfectly elastic body the above work done is the internal strain energy “du”.

where dv = dxdydz   = Volume of the element

By rearranging the above equation we can write