SFD And BMD Of A Cantilever Beam Subjected To U.D.L

A uniform distrubuted load (UDL) is a distributed load which has a constant value such as 1kN/m. Simple point forces do not always provide an accurate enough way to determine the stresses in an object such as a beam so more complex theoretical loads must be used in our analysis.

Here the cantilever beam is subjected to a uniformly distributed load whose intensity is given w / length.

Consider any cross-section XX which is at a distance of x from the free end. If we just take the resultant of all the forces on the left of the X-section, then

So if we just plot the equation No. (1), then it will give a straight line relation. Bending Moment at X-X is obtained by treating the load to the left of X-X as a concentrated load of the same value acting through the centre of gravity.

Therefore, the bending moment at any cross-section X-X is

The above equation is a quadratic in x, when B.M is plotted against x this will produces a parabolic variation.

Hence S.F and B.M diagram can be plotted as follows: 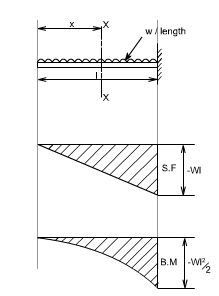