Plane sections normal to the axis before bending remain plane and normal after bending also, as shown in Fig 1.

From Fig.1, ab, cd efs are sections which remain plane and normal. Beam is subjected to pure bending (no shear). Longitudinal top fibers are in compression and bottom fibres in tension. Layer of fibres in between which is neither in tension or compression, is called the neutral surface. Neutral axis is the intersection of such a surface with the right section through the beam.

ASSUMPTION OF THEORY OF BENDING:

Note: Even through pure bending is assumed, distribution of normal stresses at any given cross section does not get significantly changed due to non

For pure bending of a beam, beam axis deforms into part of a circle of radius ρ ; for an element defined by an infinitesimal angle d, the fiber length is given by (refer fig.2)). 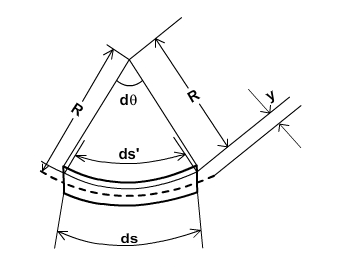