Further in the analysis of them walled cylinders, the weight of the fluid is considered neglible.
Let us consider a long cylinder of circular cross - section with an internal radius of R 2 and a constant wall thickness‘t' as showing fig. 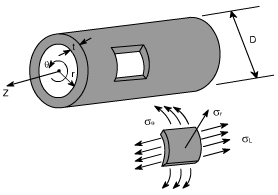 This cylinder is subjected to a difference of hydrostatic pressure of ‘p' between its inner and outer surfaces. In many cases, ‘p' between gage pressure within the cylinder, taking outside pressure to be ambient.

By thin walled cylinder we mean that the thickness‘t' is very much smaller than the radius Ri and we may quantify this by stating than the ratio t / Ri of thickness of radius should be less than 0.1.

An appropriate co-ordinate system to be used to describe such a system is the cylindrical polar one r, θ , z shown, where z axis lies along the axis of the cylinder, r is radial to it and θ is the angular co-ordinate about the axis.

The small piece of the cylinder wall is shown in isolation, and stresses in respective direction have also been shown.


Such a component fails in since when subjected to an excessively high internal pressure. While it might fail by bursting along a path following the circumference of the cylinder. Under normal circumstance it fails by circumstances it fails by bursting along a path parallel to the axis. This suggests that the hoop stress is significantly higher than the axial stress.