Consider a thin seamless cylindrical shell of nominal diameter d, and shell thickness which is containing some fluid at an internal pressure of p. The two ends of the cylinder are closed with walls perpendicular to the shell. 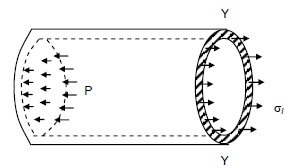 We can write the expressions for the bursting and resisting forces as below.

It can be clearly seen that the bursting force is caused due to the internal pressure acting on the vertical circular wall of nominal diameter d.

The resisting force is generated by the longitudinal tensile stress σl acting on the vertical area exposed, of thickness t and diameter d.

For equilibrium, the resisting force should be equal to the bursting force.
Thus, we get

This internal stress is called longitudinal stress, indicating the direction in which it is acting and its nature will be tensile.