If any of these assumptions are violated, the simple equations which describe the beam bending stress and strain are no longer applicable. The following sections discuss curved beams, composite beams and unsymmetrical beams.

Curved Beams One of the assumptions of the development of the beam bending relations is that all longitudinal elements of the bean have the same length, thus restricting the theory to initially straight beams of constant cross section.

Although considerable deviations from this restriction can be tolerated in real problems, when the initial curvature of the beams becomes significant, the linear variations of strain over the cross section are no longer valid, even though the assumption of plane cross sections remaining plane is valid.

curvature in the plane of bending is developed as follows.

Typical examples of curved beams include hooks and chain links. In these cases the members are not slender but rather have a sharp curve and their cross sectional dimensions are large compared with their radius of curvature. 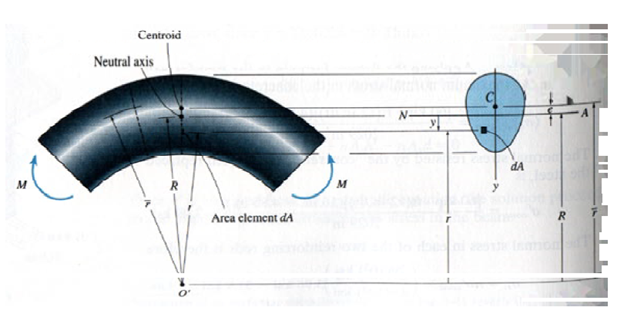