The area moment method is a semi graphical method of dealing with problems of deflection of beams subjected to bending. The method is based on a geometrical interpretation of definite integrals. This is applied to cases where the equation for bending moment to be written is cumbersome and the loading is relatively simple.

Let us recall the figure, which we referred while deriving the differential equation governing the beams.

It may be noted that dq is an angle subtended by an arc element ds and M is the bending moment to which this element is subjected.

ds = dx [since the curvature is small] 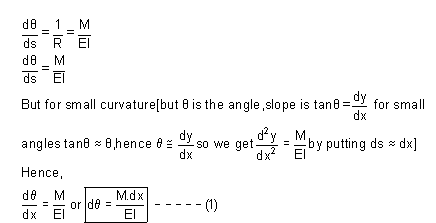 Let AO = Tangent drawn at A

BO = Tangent drawn at B

Tangents at A and B intersects at the point O.

Let ds ≈ dx be any element of the elastic line at a distance x from B and an angle between at its tangents be dq. Then, as derived earlier

This relationship may be interpreted as that this angle is nothing but the area M.dx of the shaded bending moment diagram divided by EI.