Assumptions made in the Euler’s Column theory:


The following assumptions are made in the Euier's column theory:

For a hinged end, the deflection is zero.

For a fixed end the deflection and slope are zero.

For a free end the deflection is not zero.

The following sign conventions for the bending of the columns will be used :

1. A moment which will bend the column with its convexity towards its initial central line as shown in Fig. (a) is taken as positive. In Fig (a), AB represents the initial centre line of a column. Whether the column bends taking the shape AB' or AB", the moment producing this type of curvature is positive. 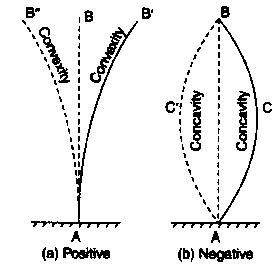 2. A moment which will tend to bend the column with its concavity towards its initial centre line as shown in Fig. (b) is taken as negative.